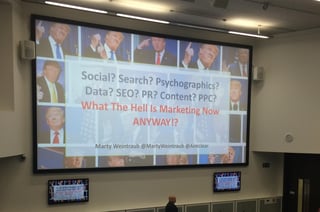 Still revelling from some of the fantastic sessions and presentations on day one, we were excited to see what day two had in store for us.

What the hell is marketing anyway?

Day two kicked off with a very energetic talk from keynote speaker, Marty Weintrab, from AimClear.

Marty explained that Google disapproves of advertorial in news but buying SEO is okay if the links are ‘nofollow’. Basically, Google indexes paid-for posts so long as the links aren’t paid for.

Marty isn’t shy of a bit of controversy and comedy in his talk – casually slipping in a couple of Trump memes when he could. He may have mentioned he was a Stone Roses fan a couple of times too.

From lookalike modelling to link building, there was a lot to take in from Marty’s session - especially on a Friday morning after the infamous SAScon social. But if there’s one thing we took away from this talk, whether we agree or not, was "why suffer with SEO when you can just buy it?!"

Paid Social and the Quest for Creativity

Next, Laura Thomas, Head of Online Display at MediaCom posed the questions – does technology limit us or empower us?

Currently we know more about our audiences and we have more creative options than ever before, thanks to technology. Although we are now more accountable for everything we post online (and are open to feedback at a click of a button) technology is empowering us to be more creative.

Laura also explained that you don’t always need to have a presence on social media platforms anymore - you can straight up buy advertising space and still have an impact. This hadn’t even occurred to me as we’re always taught to constantly keep our profiles up to date.

One example is Cadbury, that despite not having a Snapchat account, created a successful Snapchat campaign using a Sponsored Lens – e.g. this Cadbury crème egg filter.

Kristal Ireland, Head of Social Media at twentysix discussed why the media is so obsessed with millennials.

Millennials and Gen Z get a hard time in the media. The media often portrays them as lazy, self-obsessed, overweight and glued to their phones/tablets. But it’s important not to lump everyone into one bucket, as 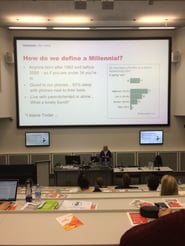 ‘millennials’ can be separated into five distinct ‘tribes’ including:

So what can brands do if they want to target these millennials? Kirstal’s advice was, simply, be authentic and talk to customers like a real person. Apparently, 70% of millennials consider a brand’s ethics when making a purchase and young people tend have a knack of spotting insincerity.

Keynote speaker, Lisa Myers, CEO and Founder of Verve Search, inspired us to think about ‘why’ rather than ‘how’ when making creative campaigns.

The best campaigns (the ‘sweet spot’) usually tug on the nostalgia element and take advantage of the technology we have.

One example is this campaign by Expedia which used an interactive Google Street View Map, interlaced with old photographs.

"SEO is a process, not a channel" #SAScon pic.twitter.com/XMC2jzKe7u

In a heated debate on the “darky and dirty times” of SEO, such as buying links, a foursome of SEO Gods joined the panel to discuss whether the core of classic, technical SEO still remains the same.

Stephen Kenwright, Director of Search Branded3, had a great analogy for SEO best practices – ”more like Wikipedia than an encyclopedia” – by this he means there isn’t solely one definition on how to do it right – lots of people have their own insights and recommendations.

The panels raised concerns that some people are measuring the number of links, rather than an individual score/ domain authority of a link. For example, one link on the BBC site shouldn’t be measured the same as one link on a travel blog.

Finally, the panel agreed that core technical SEO hasn’t changed, it’s the linking algorithms forcing people to be classier with their strategies

They discussed how marketers don’t know what to measure, measure the wrong things or don’t see the impact their marketing has. Proving the value of content marketing is often difficult, but with advanced technology we should take advantage of the data we can record. Green advised to “track ALL the things” (such as his favourite heat maps/scroll maps) as it’s better to have the data and not need it.

Over in the next room, Nick Wilsdon Lead SEO for Vodafone group, was dropping some knowledge bombs on Enterprise SEO for mobiles.

Mobiles have caused the biggest internet shake-up in history – with more than half of google searches happening on mobile. In this case, companies need bear in mind mobile optimisation of their websites.

See you next year!

While we didn’t manage to attend every session, we hope the above has given you an idea of what we gleaned from some of the fantastic search and social speakers in their fascinating presentations.

A big thanks goes to the SAScon organisers for putting on another fantastic event filled to the brim with actionable insights that companies like us can put into practice.

If you didn't manage to attend SAScon this year, you can check out some home-grown digital marketing insights with our free eBook. Simply hit the button below and download it now: 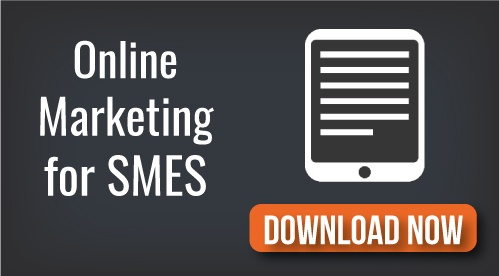