Unless you've been living under a rock for the past decade or so, it'll have been hard to ignore the rapid pace with which our daily lives and routines have become more intertwined with digital technologies.

We're not merely comfortable with carrying around powerful computers in our pockets – we're reliant on them. The increasing ubiquity of connected devices, like smartphones and tablets, has transformed both our day-to-day lives and the way we do business.

And in perhaps no other sector has the change been as profound as in residential property. In this guide, we'll take a look at how the house-buying process has changed and examine the implications for residential developers in the coming years.

While you've undoubtedly noticed technology creeping into your work and home life, actually getting to grips with the extent of the digital sea-change can be staggering.

It's no exaggeration to say it's transformed the way consumers operate – with people turning to the web to watch TV, order taxis and - perhaps most strikingly – buy a house.

To get a clearer picture of this, let's examine some key UK statistics:

Given this widespread change in consumer behaviour, it's no surprise that the house buying process has seen a similar transformation. Buyers can look up vital statistics like crime rates and proximity to local schools at a click of a button, while sellers can get years' worth of statistics on sales prices in their area with ease.

Two of the most popular sites in the sphere are Rightmove and Zoopla and as of 2014, the market was bullish for these two behemoths. Rightmove, the older of the pair, saw 18,000 agents listed, with 36 million enquiries generated each year.

Zoopla wasn't far behind, however, racking up nearly 16,500 agents and more than 24 million enquiries. It's worth nothing that – perhaps in an effort to catch up to its older peer – Zoopla forked out a whopping £20 million on marketing last year. Alongside the growth of these new methods of listing, selling and buying a house a new type of online-only estate agent has come to the fore.

Sites like eMoov, Purple Bricks, Sarah Beeny's Tepilo and many more offer a veritable smorgasbord of options for savvy buyers and sellers.

Some will offer sellers the full spectrum of services provided by traditional estate agents – such as arranging viewings and fielding offers – while others are completely 'DIY' – simply listing properties and leaving the rest up to the seller.

These tend to be significantly cheaper than high street agents, usually charging a flat fee – rather than the percentage of the sale price typically charged to those selling by traditional means.

So has this signalled the death of the high street agent? Not exactly. The reassurance of a bricks-and-mortar store, along with accompanied viewings and local exposure seems to remain popular with consumers.

Online estate agency Hatched.co.uk recently claimed that the sector holds around five per cent market share and that the situation would reach a tipping point in 2016, when 16 per cent of homes would be sold via the web.

And Meet My Agent co-founder Ashley Alexander suggested that investing in a good local agent will still be preferable to the average consumer.

"A good local estate agent is often worth their weight in gold when it comes to getting an accurate valuation, having access to and qualifying potential buyers, handling viewings, negotiating on price, and ensuring that the sale runs smoothly," he said.

The High Street Strikes Back

One way the high street has sought to fight back against the rapid growth of these popular websites is by launching its own competitor.

Earlier in the year, a consortium of estate agents set up Onthemarket.com. This unique portal allows agents that list there to become part-owners, however, by signing up, they forgo their chance to list on the likes of Rightmove and Zoopla.

Chief executive of the site Ian Springett claimed this method would help to challenge the dominance of the big two:

"The result is that... as well as losing large amounts of property stock, Rightmove and Zoopla will also suffer a substantial hit to their income," he said.

However, the big online players seem unfazed by this move, with Rightmove commercial director Miles Shipside claiming the set-up goes "fundamentally" against the customer's best interest.

"As an agent, how do you explain to a seller that you've signed up to something that wants to stop you advertising in one of the places that you know has all the buyers?" He said. The Implications for Developers

Both Rightmove and Zoopla already list tens of thousands of new homes on their respective sites, suggesting appetites are already high among this demographic.

Since the trend towards online won't be reversing itself anytime soon – the question is how can developers best take advantage?

While it's nigh-impossible to cut the major portals out completely – developers should also aim to grow their own online audience and make their offering stand out via marketing.

While we've produced in-depth guides on social media and online marketing for residential developers, some top-line tactics for achieving this include:

Online advertising: The ability to target likely buyers in geographically-specific areas offered by both Facebook and Twitter's promoted posts should be very appealing to developers.

Showing off homes in new ways: While having a video showcase of your new properties is a given in 2015, developers shouldn't neglect new technologies like augmented reality and even holograms.

Data: With many properties acting as an investment, as well as a home, giving potential buyers access to pre-packaged data on local property sales, price changes over time and rental yields is a great way to pique their interest.

Rich websites: New developments will usually merit their own websites. However, too often these are little more than an afterthought. By optimising the development's web presence (including making it friendly for mobile devices), making reams of information freely available and providing a good user experience (without arduous contract forms, et cetera) – developers can exponentially increase the performance of their web assets.

Influencers: Social media is an unparalleled tool for influencing the potential buyer's journey. During the stage where consumers are searching for information and evaluating their options, a robust and active social media presence provides the opportunity to connect and engage.

SEO: Buyers can't find a development if they don't know it's there. And given that the vast majority of buyers will start their journey via a search engine – it pays to be visible. While online advertising is an option, the vast majority of users will favour organic results. This necessitates optimising your web presence for search performance, through a variety of means.

If you've got any thoughts on how the residential sector has been affected by the dawn of digital, or any questions on anything we've covered – be sure to leave a comment below, or get in touch via Twitter.

And if you're a developer looking for more tips on how best to exploit the growth of online, be sure to download our introductory guide to marketing your properties via the web today: 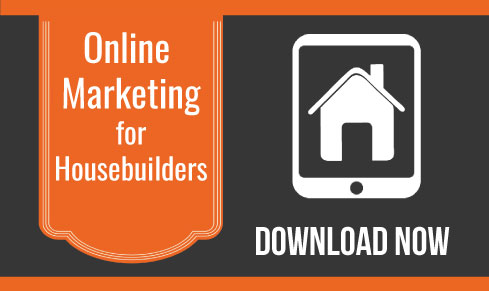