In just two weeks’ time MIPIM 2019 will be getting underway, seeing the Manchester Pavilion turn into a hive of property announcements, thoughtful debates and discussions surrounding the infrastructural future of our city.

Whilst there are countless seminars that are already generating social conversations, a key session that’s certain to pull focus on the Wednesday of MIPIM will be the ‘Carbon Neutral by 2038: Manchester’s Sustainable Future’ talk.

Manchester is growing at a rate of knots, with a skyline that’s changing daily – but is this constant growth hindering our city’s better judgement in delivering sustainable building strategies?

In November 2018, Manchester City Council adopted new science-based targets based upon the four "Playing Our Full Part" proposals developed by the Manchester Climate Change Board. These proposals were put forward asking the city to:

MIPIM falls in the month of March 2019, when the Draft Action Plan is set to be announced. According to the Manchester Climate Change website, the bill will be considered by Manchester City Council on the 6th March 2019, followed by the Executive Committee on 13th March – the same day as the MIPIM event. Greater Manchester Mayor, Andy Burnham, will be a panellist during the event, so keep a keen ear out for any updates he throws your way.

Carbon neutrality is the concept of achieving ‘net zero’ carbon dioxide emissions by balancing carbon emissions with carbon removal. There are countless ways in which Manchester City Centre could work towards carbon neutrality which are likely to be discussed during the event, including:

Carbon neutral cities aren’t necessarily a new craze, but they’re certainly becoming a much wider discussion point now that building and population density is growing throughout Europe. According to the Technology Strategy Board, the construction, operation and maintenance of the built environment accounts for 45% of total UK carbon emissions (27% from domestic buildings and 18% from non-domestic buildings).

As well as Manchester’s 2037 plan, to combat these worrying statistics our Capital City has become a member of The Carbon Neutral Cities Alliance (CNCA), a collaboration of leading global cities working to cut greenhouse gas emissions by 80-100% by 2050 or sooner. There are already some EU cities that are closing in on their deadline, including Copenhagen which is aiming for carbon neutrality by 2025.

Manchester’s ability to innovate, grow and compete with world-leading cities leaves us with little doubt that this 2037 initiative has some green legs to stand on.

Andy Burnham, Mayor of Greater Manchester - Upon becoming elected, Andy announced his ambition to make the city-region one of the greenest in Europe, and in his manifesto he committed to “a new, accelerated ambition for Greater Manchester on the green economy and carbon neutrality”.

Chris Oglesby, Chief Executive of Bruntwood – As one of the leading property developers in the UK, creating commercial buildings that are catered towards a modern occupier, it should be interesting to Chris’ take on how the office space market can contribute to our 2037 deadline.

Will we see you there?

With 22 years’ experience managing the corporate reputations of property clients through both traditional media and online campaigns, Roland Dransfield has significant expertise in giving property schemes and campaigns the regional and national attention they require.

If you need help with your MIPIM marketing efforts or would like to discuss other PR and marketing activities, get in touch. We have a dedicated MIPIM team travelling to Cannes this year, so feel free to get in touch with them at Lisa.Morton@rdpr.co.uk, Alex.Bell@rdpr.co.uk or Maria.Murphy@rdpr.co.uk. 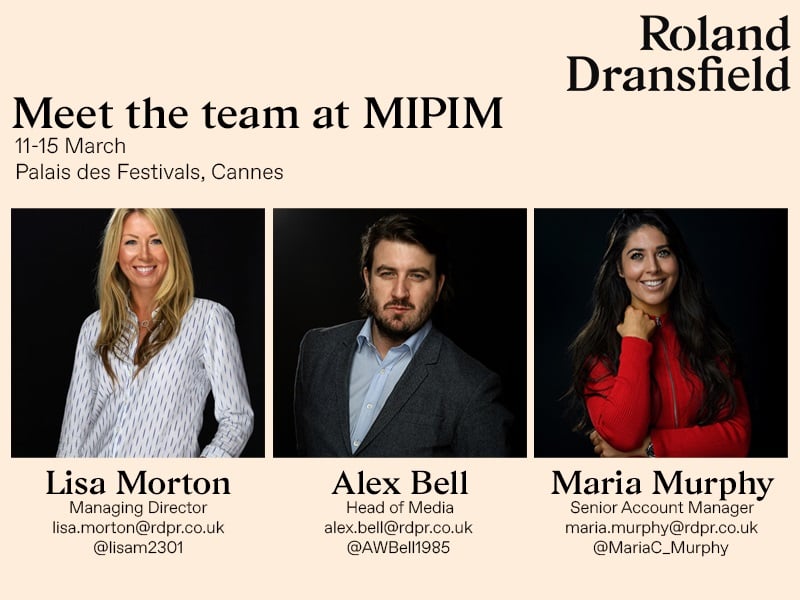