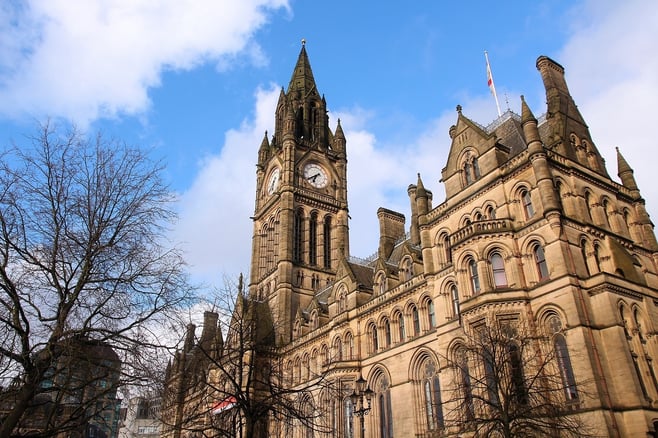 In this blog, we’ll look at some of the reasons why you should consider north shoring (or “leap shoring”) to the UK’s second city.

We may be a little biased, but we think Manchester is THE place to be right now. If you’re considering moving your company to Manchester, we’ve got your back.

In fact, take a look at the first in our Ebook series, Marketing your Brand in Manchester – Making connections in the City for more hints and tips on making all the right moves here in Manchester.

North shoring is a phrase that has been well-established in our vocabulary for some time.

North shoring is the practice of moving or establishing your workforce in the north of the UK, where office space and living costs tend to be less expensive than in London or elsewhere in the South.

Companies, both big and small, have switched on to this opportunity to increase their profits and move or expand into cities like Manchester in recent years.

Added to this is the latest phrase coined to explain the growing interest from international companies looking to put down roots in the UK, choosing Manchester over what would have traditionally been London.

Introducing the concept of “Leap shoring” – It’s not a phrase that appears in the Oxford English Dictionary (yet), but if it did, it would probably say something like this:

Leap shoring (Verb): The action of an international company, organisation or official body moving or expanding their workforce to a location headquartered in the north of England, likely to be Manchester.

All things considered, the City of Manchester is a great place to invest and take root, and if you’re not convinced to move your company to Manchester just yet, here are some more reasons for you.

As the North’s only major international gateway, Manchester is truly connected, providing vital transport links to the rest of the globe via Manchester Airport. This is really important for international companies leap shoring to Manchester, plus the airport was awarded “Best UK Airport” in the 2016 Globe Travel Awards.

Combine this with a national rail network that can get you to most major UK cities, including London, in two hours, a tram network, and a 30-mile outer ring road that connects Manchester to its surrounding towns and suburbs.

Manchester’s high-speed fibre broadband network keeps the city’s businesses connected, and the digital infrastructure of many of Manchester’s commercial buildings has received a “WiredScore” accreditation for the quality of their internet connectivity in office spaces.

Oh, and for anyone considering north shoring or leap shoring to Manchester, did we also mention the water taxis? Known as “Waxis”? Manchester’s water taxis sail on the city’s waterways, offering a more unusual mode of transport for the commuters and visitors.

More bang for your buck

It’s true that living and operating costs in Manchester are on average 30-40% less than London, and because of this, the city is ideal for north shoring, moving or locating back office functions like legal, finance, marketing, IT and operations support. So much so, that KPMG has consistently ranked Manchester as one of Europe’s most competitive business locations.

Big fish in the talent pool

Manchester is a hub of innovation, with leading universities and a booming new media industry.

The city’s universities produce over 35,000 graduates each year, 54% of which choose to remain and work here after graduation. This talented pool of prospective employees are multi-skilled, and in many cases, multi-lingual, speaking over 200 languages between them here in Manchester.

The Manchester Evening News has also recently reported on the £33m investment in Manchester Business School which “will further enhance the city’s reputation for providing high-flying young professionals.”

In June this year, Microsoft announced that they are moving 100 staff to be headquartered in Manchester City Centre. Only fitting, as the city is the birthplace of modern commuting, after all.

The Economist Intelligence Unit has described Manchester as one of the world’s 50 most liveable cities.

With a booming restaurant scene, a bountiful selection of museums and galleries to visit, world-class theatre, rocking music scene, exciting nightlife, sensational sports offering and a shopper’s paradise, Manchester is a fantastic place to live, work and spend time in.

Roland Dransfield is a Manchester based integrated communications agency. Manchester born and bred, the agency is celebrating its 21st birthday this year and 21 years in this city.