While advertisers have enjoyed the ability to measure the performance of their promoted tweets for some time – Twitter recently rolled out its analytics to all users, enabling you to assess the performance of all your activity on the platform free of charge.

In this guide, we'll take you through how to access Twitter analytics, what the metrics mean and how you can use the information to better your social media marketing.

If you'd like to read this guide offline later, or print it off - we've also compressed all this information together into a handy, digestible PDF guide, which you can download for free here.

If you're reading this, I'm going to assume you've already got a Twitter account, so your first step should be to log in to this via the site's main page, then head over to:

You should be greeted with a dashboard that looks a little something like this:

What does it all mean?

You'll be initially greeted with a breakdown of all your account's activity over the past 28 days and how this compares (by percentage) to the previous 28 days' activity, which includes:

Tweets: The number of tweets you've put out.

Tweet Impressions: The amount of potential views your tweets received. An important distinction to make is that these don't equate to how many times your tweet was viewed – instead referring to the rate at which it was delivered to your followers' streams.

So even if your tweet has been served up, it's entirely possible for viewers to scroll past or completely overlook it – meaning you mainly have to rely on measurements like engagement and clicks to discern how well it was received by your followers.

Profile visits: The number of times your profile page was visited.

Mentions: How many times your handle (e.g. @geraldheneghan) was used in the tweets of other accounts.

Tweets linking to you: How many times your Twitter Card(s) (photos, videos and other media attached to your tweets) were retweeted.

You'll also receive a summary of the month to date: 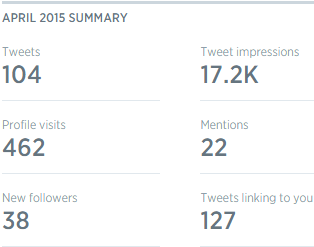 And highlights of your tweets from the month: 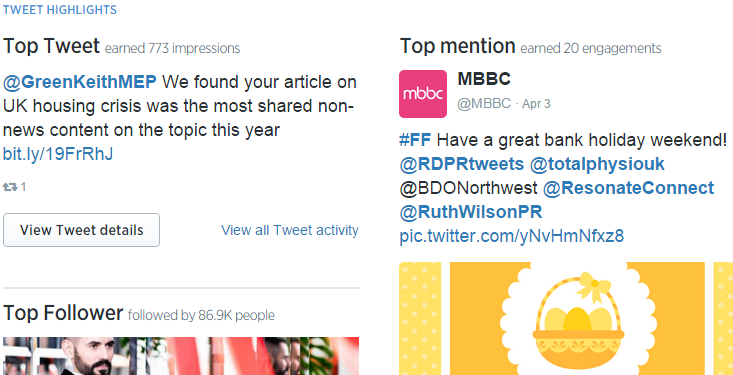 If you carry on scrolling down, you can see similar summaries for previous months.

Clicking the second page at the top will bring up the 'tweets' tab. This contains a breakdown of your all your Twitter activity and leads with a fairly self-explanatory graph: 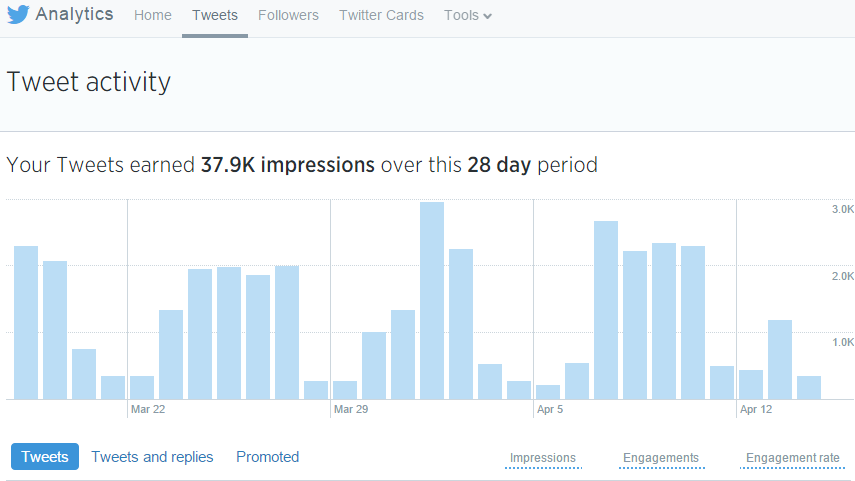 Over at the top right, you can change the time period covered – and although you can look back in time, three months will remain the maximum length you can examine. You can also hit the 'export' button to extract the raw data into a handy spreadsheet (.CSV) format.

The tweet: The text, any media ('cards') attached to it and the time of the tweet. This can also be changed to include tweets and replies and any paid ('promoted') tweets you issued during the period.

Impressions: The number of times users potentially saw the tweet. As you can see, our example tweet reached around 7% of our total follower base.

Engagements: The number of times users shared, favourited, followed you off the back of or clicked anywhere on your tweet.

Engagement rate: The number of engagements divided by the total number of impressions. 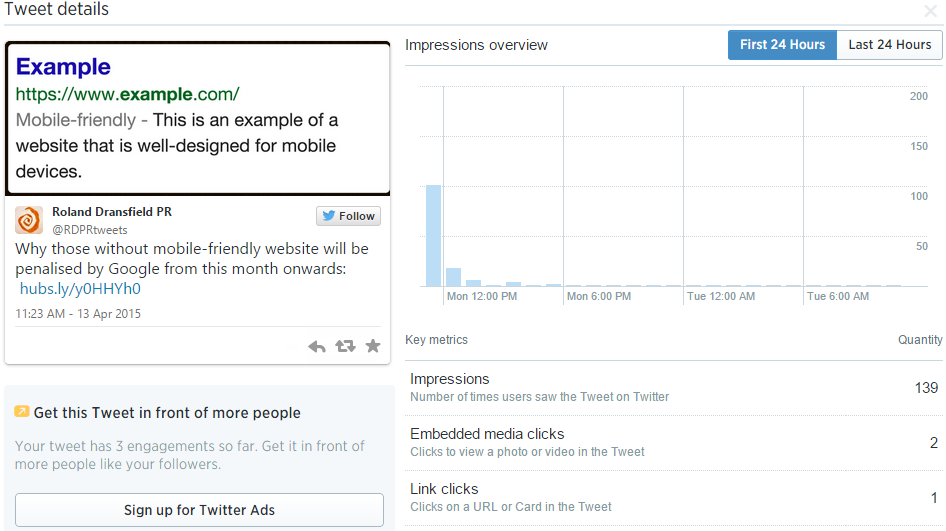 This can also be done from your regular Twitter stream by clicking the graph icon. 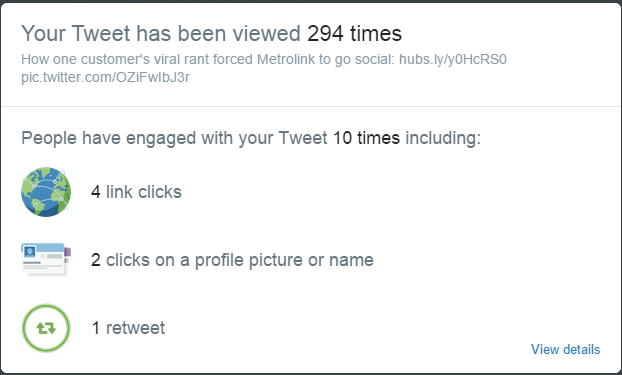 The followers tab provides a visual breakdown of your follower growth, in addition to some interesting stats on what countries and cities they come from, what they're interested in and their gender. 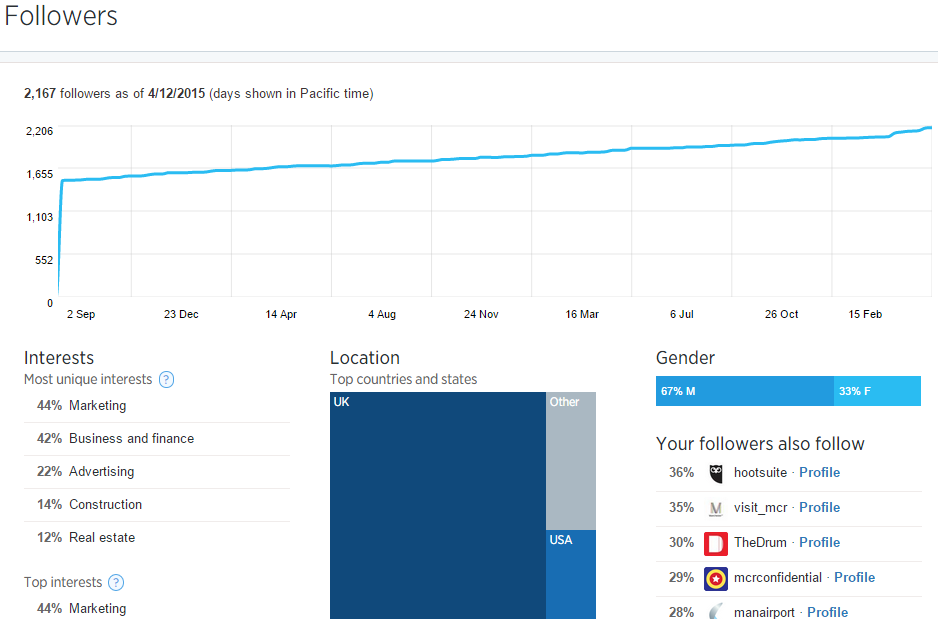 As mentioned, Twitter cards are video, pictures or other types of media that can be attached to tweets using a bit of HTML trickery.

On your 'cards' analytics page, you can see how many you've posted in the last month and how well they've done: 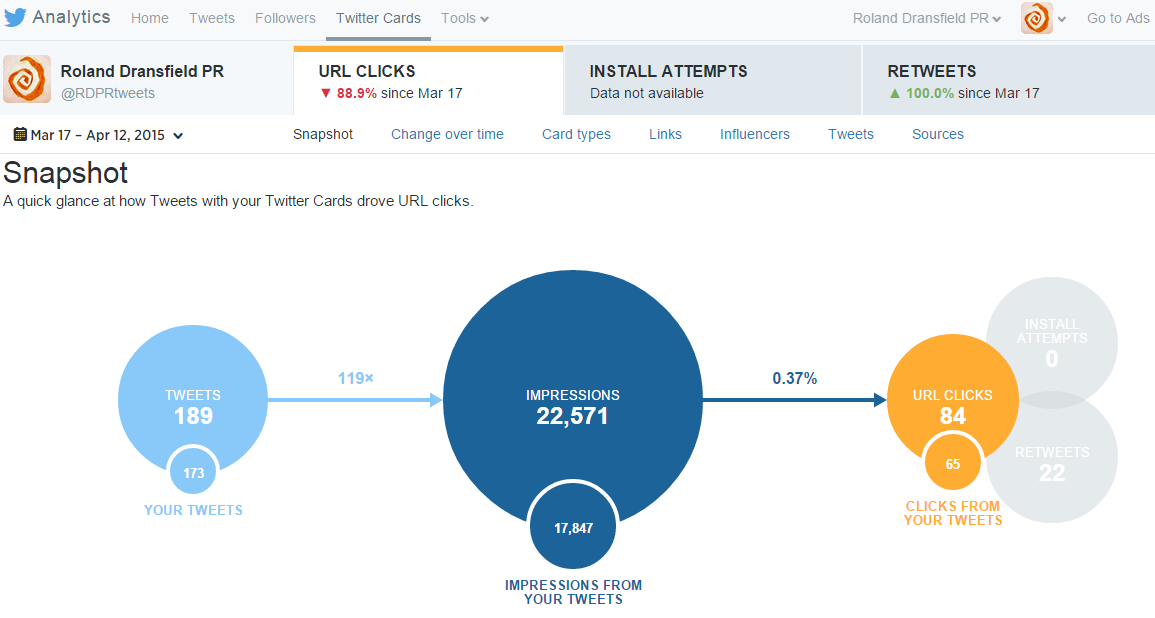 Scrolling down, or clicking across tabs, lets you see how performance metrics like clicks, retweets and the live have changed over time and how these changes correlate with impressions, the amount of tweets you've put out.

Delving further into the statistics lets you discern which type of Cards (if you're using more than one) are performing best, as well as the links within your Twitter Cards that got the most clicks.

You'll also get a breakdown of the most successful tweets that drove link clicks.

And last but not least, the sources (apps, websites and widgets) that your influencers use to tweet from.

For app developers, the 'tools' tab allows users to set up cards aimed at targeting, attracting and converting potential customers.

What to do with the data

So now you've got a wealth of data at your fingertips – what's the best way to form actions from the insights you've gained?

Unless you've already been using third-party publishing and analytics tools, one surprising finding might be your relatively low reach when it comes to who sees your posts.

For instance, our most successful tweet of the month to date was potentially seen by 789 people, a shade over 36 per cent of our 2171 followers. And this was mainly thanks to the post being shared by a relatively influential user.

However, looking at the impressions of 10 tweets from the past couple of days, we find that on average, we can expect to reach about five per cent of our total follower base. So how can you use this data to your advantage?

While we personally use the excellent tools of Social Bro to find and refine these for ourselves and our clients - it's both feasible, cost-effective and potentially quite useful to work out when you're reaching the most people.

Once you've ascertained the days and times that you tend to reach the most people, it makes sense to cluster your social activity around this schedule. While you could manually post during these periods – it's well worth looking into a free publishing tool like Hootsuite so that you can schedule multiple posts at your leisure.

You can't just do 'a bit of social': Stats like these underline the fact that when it comes to social media marketing – it's not just a case of being in it to win it.

While industry evangelists, particularly our enthusiastic friends across the pond, are keen to highlight the advantages of the medium, the bottom line is getting it right requires a great deal of concerted effort.

It takes hard work and persistent measurement to constantly refine your efforts with the aim of serving up what your potential customers want, when they want it and in the format they want it in. So if you're just starting out, don't be surprised if it takes a while to gain some traction. The last thing you want is to come across as a spammer, so getting the balance between getting your posts seen and oversaturating your audience is crucial.

Research indicates the average lifetime of a tweet is around 18 minutes and around half of all the engagement you can expect it to receive will happen with in the first 24 minutes of its existence.

And since less than half of Twitter users are thought to check their feed every day, it makes it all-the-more vital to target them precisely.

While there's no easy answer, as a starting point, we'd recommend tweeting in proportion to about half the amount of followers you have.

You'll want to start small, say two or three posts a day, clustered around key times, that are spread out far enough apart that they don't risk 'cannibalising' each other's attention. And, once you've generated some stats, put them to use in determining when you've had the most impressions.

After you've managed to attract a few hundred followers, it's usually safe for you to start ramping things up a bit. I asked the same question of Hubspot when we first became a partner and our contact revealed the company tends to tweet at least 15-20 times a day.

Looking at the sample of tweets used above, we generated approximately 2.1 engagements per tweet. However, this includes link clicks, which the third-party tools we use tend to list separately to retweets and favourites.

If you're looking to get a grip on link clicks in isolation (which you definitely should), several link-shortening services allow you to track these. Personally, we opt for bit.ly for the ease with which you can search through an archive of historic links.

Most Twitter users tend to participate passively – reading your post and if compelled, clicking any links embedded within. This means retweets, favourites and now comments, should be counted as a more powerful endorsement.

As with the best times to tweet, you'll want to pore over your stats and see what types of tweet are generating the most engagement. You don't have to endure a cold start, however, as there's been a wealth of broad research conducted into the best formats, topics and media to post. Attracting and engaging the right kind of followers is the bottom line of social media marketing, but you shouldn't become too obsessed by numbers.

After all, you can buy tens of thousands of followers, but while it might look impressive at a glance, it's unlikely to do you much good when it comes to attracting new business.

Instead, you should focus on trying to attract relevant followers that'll want to hear what you have to say and hopefully engage with you.

It's easier said than done, however, and we could easily fill an entire blog post with advice on this. Suffice to say there's reams of advice available online, but if I had to boil it down to a few key points:

-      Don't be overly self-promotional (the rule of thumb is 80/20 in favour of non-promotional, interesting social media posts)

Twitter's follower analytics should give you a good benchmark in terms of how well you're doing so far, but if you want to take things up a notch – several publishing tools offer more detailed breakdowns of your follower base, or you could opt for a stand-alone reporting tool.

If you're going for the latter option, I'd once again recommend trying SocialBro – they're not paying me honestly. Its basic package is fairly cheap and you can even go for a free trial with some of its more advanced features.

If you've tried Twitter Analytics and want to share your experiences or have any questions to ask – be sure to leave us a comment below or get in touch via Twitter. We always love to hear from you.

And if you're still hungry for tips on how to better-utilise your company's Twitter page, you won't want to miss our free eBook guide for those in the property industry. Simply hit the button below to download now: 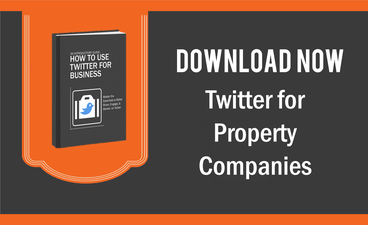 We've also compressed all this information together into a handy, digestible pdf guide, which you can download for free here.