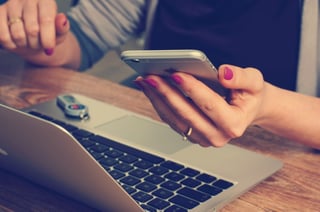 Last week, we reported on what we learned from one of the UK’s finest search, analytics and social conferences, SAScon. Amongst a whole host of industry experts, one session that called to me was Laura Thomas’s (Head of Online Display at MediaCom) “Paid Social and the Quest for Creativity” talk, where she explored what it means to be creative and how technology is influencing us.

As part of the digital team, I’m always looking at new ways to push our team to be more creative and the thought that technology is empowering us to do so really interested me. So I delved in deeper to what this means for us and the industry.

Currently, as businesses and agencies, we know more about our audiences and have more creative options than ever before. That’s thanks to technology.

Because we are now so open to feedback online at a click of a button, we are accountable for everything we post online. This means we have to have more thought about what we put out there, instead of just firing out a campaign with no real strategy behind it or end game. Does that limit us or empower us? I think it’s the latter.

Being a creative doesn’t just mean someone who creates something, however.  We all have the ability to be creative throughout the planning and delivery of our campaigns.

To create a successful campaign, you should think about targeting, placements, why and how we buy and how this demonstrates our creativity. To quote Laura in her talk: “creativity doesn't begin and end with putting someone's name on a Coca Cola bottle.”

So how can we take advantage of the technology to create some amazing campaigns? Let’s take a look at a couple of examples of creative campaigns that we can all learn a thing or two from.

The Battersea Dog’s & Cat’s Home’s #LookingForYou Campaign was specially created to highlight the quest to rehome dogs by using innovative technology to engage with passing shoppers.

The campaign took place at Westfield Stratford City in London and used a series of billboards and display screens around the city centre. The interactive screens are activated by a tag contained in leaflets which are handed directly to passers-by’s.

As people walk past the screens, the radio-frequency identification (RFID) tag within the leaflet starts a video of Barley, a former Battersea dog, who begins to interact with the viewer.

The success of the lies not only with the advancement in technology, but also playing on the emotional angle for unsuspected viewers. Just imagine a rescue dog following you around with those sad puppy eyes – could you resist? Both cute and creative and that’s why it works.

Carly Whyborn, Head of Operations at Battersea Dogs and Cats Home, said: “Battersea rehomes animals all over the UK and beyond and this could help encourage people to choose to rescue a dog. We’re using innovative technology in a way that has never been seen before, and we hope more of our abandoned animals find loving homes because of it.”

Another creative campaign brought our attention was the Volvo Superbowl interception campaign. Twitter enabled Sweden to ‘steal’ the Superbowl, with what is has been deemed as the 'Greatest Interception Ever.'

Essentially, Volvo asked to tweet its hashtag, #VolvoContest, during other car brands' Super Bowl commercials. Participants then nominated a friend to win a new Volvo XC60 luxury crossover, with the idea being that the company wants to focus on real people rather than its own marketing message.

An incredible 2000 tweets were posted per minute about Volvo, every time a automobile advert aired during the Superbowl ad break. They got so much audience engagement and eyes on their brand without even having to fork out on a TV ad – ingenious!

Did you attend SAScon this year and have a favourite session you’d like to share or perhaps you have been inspired by a recent creative campaign? If so, let us know via Twitter or leave a comment below.

And if you didn't manage to attend SAScon this year and want to find out more insights, you can check out our round-up pieces on our blog.