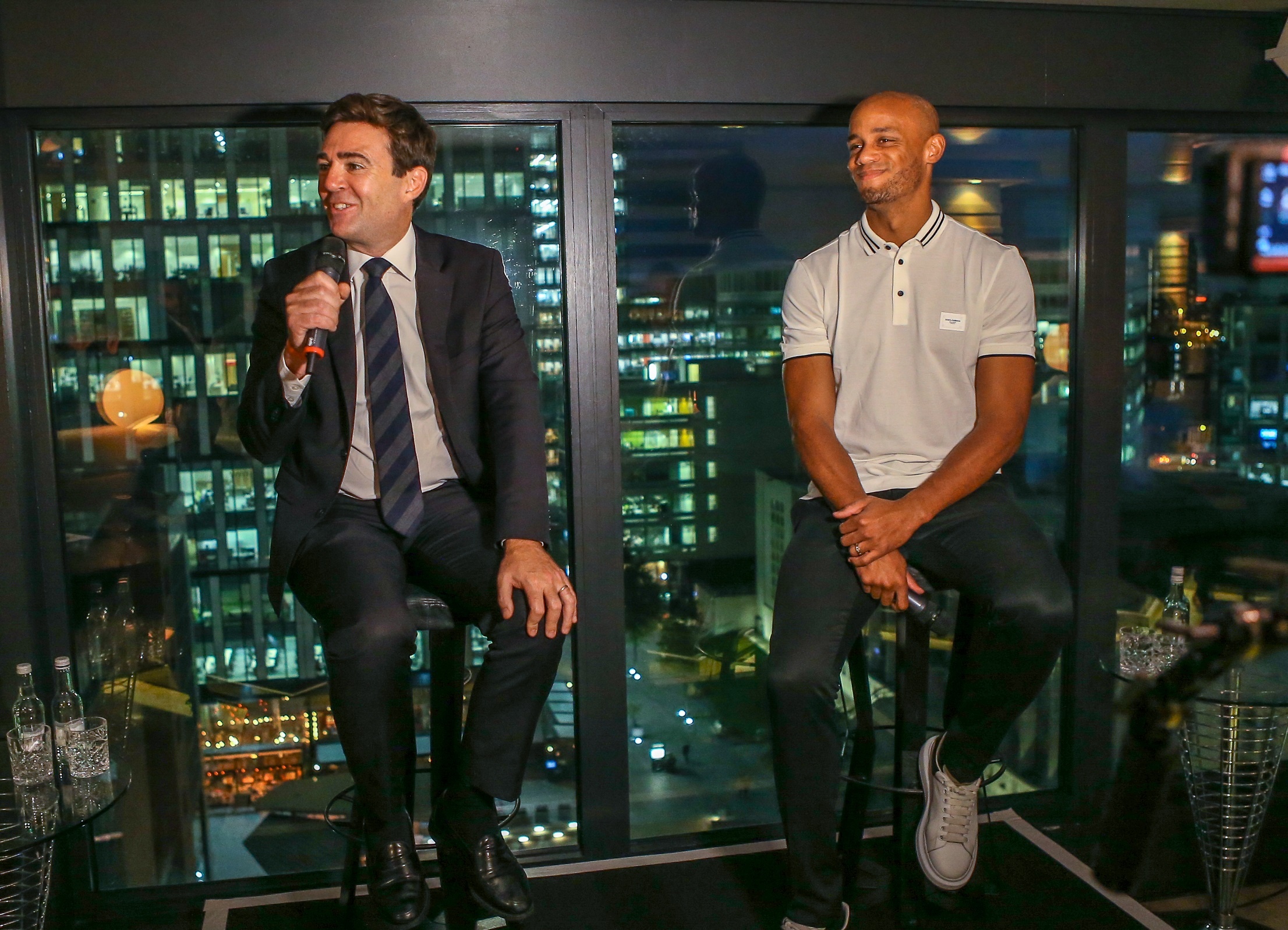 Vincent Kompany and Mayor of Greater Manchester Andy Burnham have teamed up to launch an unprecedented campaign that will tackle rough sleeping in their city-region.

Tackle4MCR, a fundraising vehicle, has been set up by the pair in a bid to create a social movement.

With Vincent currently celebrating his Testimonial season at Manchester City, he has pledged to make use of the momentum generated by this to assist the Mayor with one of his top priorities.

Last night members of Manchester’s business community, along with Tackle4MCR media partner the Manchester Evening News, gathered in the city to signal the launch of a campaign.

During the event at Manchester House both Andy Burnham and Vincent described ‘Tackle4MCR’ as a ‘once in a lifetime’ opportunity to influence social change at a time when it is most needed.

And they urged those ‘with a big heart for Manchester and the means to make a difference’ to become Gold or Platinum Partners of Tackle4MCR.

Businesses and individuals have already expressed interest in becoming part of the Tackle4MCR movement.

Those who do sign up to Tackle4MCR will follow a considered approach spanning the full length of the football season, incorporating a unique gala dinner, a participative city-wide #FootballFriday campaign, with an important awareness element around rough sleeping aimed at schools, culminating in a rare testimonial gala match at the Etihad Stadium following the close of the 2018/19 season and courtesy of Manchester City.

Funding raised for Tackle4MCR - a special fundraising vehicle with a social purpose that has been set up in the form of a limited company for one year by Andy and Vincent – will go to the Mayor of Greater Manchester’s Homelessness Fund.

The Mayor’s Fund is turning all of its efforts towards ensuring that every rough sleeper has a bed every night of the week over this coming winter.  The funds raised by Tackle4MCR will play a key part in delivering this ambition.

Vincent and Andy are now hoping ‘Initial Partners’ will join them in tackling the problem of rough-sleeping and be part of their team from the very beginning.

Speaking after the Tackle4MCR launch event at Manchester House Vincent said: “I’ve received much from Manchester: a great career at the highest level, unconditional support from the fans through thick and thin, a lovely family and so much more to be grateful for.

“Over the past decade I’ve been lucky to have witnessed and played a part in Manchester City’s rise as a club and a brand. This has also run parallel alongside the rise of a whole region.

“However, with this spectacular rise, comes a very visible downside: more and more people are left out of and have no access to the benefits of the rapid development, often leaving them no choice but to end up on the streets.”

He added: “And this is why our Mayor Andy Burnham and I have launched Tackle4MCR, a movement that will stand on its own feet and one that can be successful if everyone plays a part.”

Mayor of Greater Manchester, Andy Burnham has pledged to end the need for rough sleeping in the city-region by 2020. The Mayor’s Homelessness Fund was set up on his first day in office and plays a key role in Greater Manchester’s efforts to tackle homelessness.  The Mayor kick-started the fund by donating 15% of his own salary and continues to do so every month.

Alongside the fund, the Mayor established the Greater Manchester Homeless Action Network which brings together local authorities, charities, voluntary, social enterprise, faith and community organisations from across the city-region.  Together they have set out their ‘A Bed Every Night’ action plan that will be rolled out over the coming weeks and the funds raised by Tackle4MCR will bring this plan to life.

“After an outstanding decade where he has led Manchester City to the heights of the footballing world, Vincent has now decided to dedicate his testimonial year to helping those most at need in our city.

“In Greater Manchester we want to provide a bed for every rough sleeper every night of the week over this coming winter. This will not be an easy task but we believe this is the best way to help people off the streets and crucially, also give people access to the support they need. This unprecedented scheme will come at a significant extra cost and Tackle4MCR can play a huge part in making this plan in to a reality - but only with the generosity and support of people from across Greater Manchester.

“In his famous poem, Tony Walsh told us that ‘Some are born here, some drawn here, but all call it home’. Those words are personified by Vincent Kompany and his desire, through Tackle4MCR, to give back to this city that he now calls home.”

Tackle4MCR pledges to keep its running cost under 25% of all money collected during the campaign.

Every penny of Tackle4MCR charity funds will be managed by the Mayor of Greater Manchester’s Homelessness Fund.  The Fund will utilise the money raised efficiently and transparently to support the ‘A Bed Every Night’ action plan.

To find out how you can help raise funds for this incredible important initiative, visit Tackle4MCR's website here.

If you need some help with any of your own PR or marketing campaigns, get in touch with us at Roland Dransfield and we’ll be able to help you out.