I'm not going to sugar-coat it. Google+ isn't the best social network in the world, nor the most active or popular – particularly in the UK.

However, none of that changes the fact that it's still something that pretty much every business should be using and in this guide, I'll set out several compelling reasons as to why your organisation should still be using Google+.

A bit of background

Google+ rose from the ashes of previous social networks trialled by the search giant, including Google Buzz and Friend Connect. 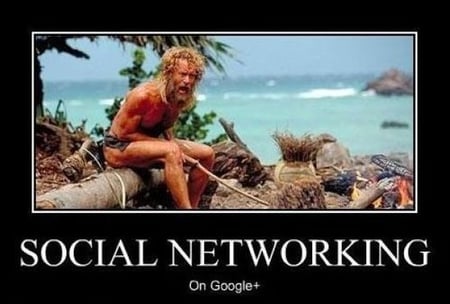 At the time, commentators were keen to hail it as either a Facebook-killer or doomed to failure and have prematurely sounded the death knell for it several times since.

Following its 2011 launch, Google+ was referred to as a 'social network' but over time it was defined as a 'social layer' that lay across all of Google's services.

It's seen its fair share of trials and tribulations over the years, with executive Vic Gundotra departing in 2014 and Bradley Horowitz taking over less than a year later, with promises of a "huge shift" in how the platform worked.

Despite recurring predictions of its demise, Google+ doesn't look to be going the way of the dodo anytime soon and it continues to boast a variety of features that make it a superb platform for businesses to engage with.

But to use a simple analogy, the 'social network' facet of it works like a hybrid between Twitter and Facebook. Google+ is like Twitter in that you'll tend to follow celebrities, brands and news accounts for topics you're interested in (although you can obviously connect with friends on there, if you can find them).Google+ is a bit like The Matrix, in that you have to experience it to truly get a feel for what it is.

And it's a bit like Facebook in the way your 'news feed' is displayed (although you have many more customisation options) and the focus on groups and communities.

However, to focus only on those two aspects of Google+ would be to neglect the wealth of fantastic functionality it boasts, as well as the way it ties in your account with all of Google's other services.

You get all the stuff you'd expect with your typical social network, such as user profiles, a news feed and photo albums. However, Google+ goes above and beyond other networks in terms of features it provides to business pages for free. To briefly summarise some of its key features: 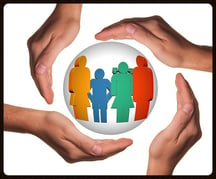 Circles: Circles are Google+'s unique way of organising followers. Users and company pages can organise people into groups or lists – which is particularly useful if you want to segment followers. This can be especially useful when sharing, as you don't have to broadcast something that might only be of interest to a specific niche to your followers at large.

It also makes curating interesting content from disparate fields easy, allowing you to customise your news feed to only display content from a specific circle at the click of a button.

Hangouts and Hangouts On-Air: Google+ provides free video conferencing, connecting up to 10 people via the website or mobile app. Hangouts also lets you use other Google and third-party apps within your conferences – from watching videos on YouTube to collaborating on documents via Google Docs and more.

Hangouts on-air enables you to create free webcasts and live-stream these to your associated YouTube channel, as well as recording them for later use. It's seen high-profile usage from celebrities like will.i.am and even US president Obama had a go.

It basically lowers the bar for creating webinars or podcasts significantly – allowing companies with a minimum of equipment (e.g. just a webcam) to have a go.

+1 Button: Google's +1 button is analogous to Facebook's 'Like' feature. And while Google hasn't stated this outright, much of the digital marketing industry is convinced the way the platform treats them can add value in terms of search performance.

The number of +1s was found to be the 2nd highest correlated factor for search rankings in Moz's 2013 Ranking Factors study and Searchmetrics 2014 Rank Correlations research.

But, as any good empiricist knows, correlation does not equal causation, and former head of webspam at Google Matt Cutts suggested that +1s were not directly taken into account within the search engine's algorithm.

When it comes to ranking factors, Google keeps its cards close to its chest, but industry experts believe that the correlation derives from the fact that the search giant treats Google+ posts like websites – indexing ('reading') and utilising them when deciding where any given page should appear for a query

As such, +1s are thought to work in a manner similar to backlinks – adding authority to a page or post in Google's eyes and the most useful and valuable content tends to accrue more shares across all platforms. So instead of merely chasing +1s or trying to game the system, it's more advisable to put effort into creating compelling content that prompts people to genuinely share and endorse it.

Communities: Communities work like Facebook Groups and allow like-minded users to get together and create a forum to discuss and share stuff related to a particular topic.

Google+ communities tend to be administered by fairly savvy users, so you won't get away with using them to relentlessly promote your own content. They can, however, be invaluable for finding interesting content to curate around both niche and broad topics.

Photography: In addition to the bog standard photo options you get on the likes of Twitter and Facebook – Google+ also comes with an in-built photo editor and a fantastic feature called 'auto-awesome'. This tool enables you to enhance and apply effects to your photographs, or automatically create GIFs (short animations) of video content you upload.

As we've stated previously, getting on Google Local is an easy SEO win for companies of every shape and size. Launched in 2014, this combined several pre-existing features to create a one-stop-shop for companies – particularly those who offer goods or services in a specific area.

Without boring you to death with the technicalities – it's heavily integrated with Google's search products (like Maps) and when people are searching for things related to your business areas in a certain region – links to your page and other local competitors will be shown.

Your location on a map will be displayed, alongside ratings/reviews, relevant pictures you've posted, opening hours and your phone number. It presents an unprecedented opportunity to connect with potential customers actively searching for your products or services.

It ties in especially well with Google's mobile services and since more searches now take place on mobile devices than desktop computers – it's not something you want to miss out on. 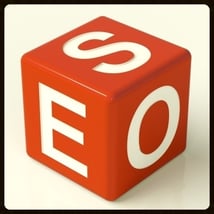 While simply being present on Google+ won't rocket you to the number one spot for your most desired keywords – it can provide benefits in terms of search visibility without a great deal of effort on your part.

There's a lot of misinformation around this topic and since Google won't come out and tell everyone exactly how the connection between Google+ and search works – the industry relies on reverse-engineering, research and educated guesswork in determining the ins and outs of this relationship.

In brief, there's three ways that Google+ can affect your search visibility.

Indexing: The way Google reads the web and updates its search indices is known as 'indexing'. As noted in the section on +1's above, Google treats Google+ posts as websites in themselves – granting them their own URLs (web address) and indexing them more quickly than updates to conventional websites.

Users +1ing or sharing posts is taken as an endorsement of whatever it is you've posted – granting it more prestige in Google's eyes. If what you've posted is a link to an article or page on your website, for example, this positive association will be taken into account when Google determines where it should appear for a given query.

While it's not a guaranteed recipe for search engine success – it can help. There are a couple of caveats, however. Firstly – you have to have a wide enough and relevant network of followers for users to see and engage with your post and secondly, what you post has to be useful, engaging or interesting enough to earn those interactions.

Local Integration: As we set out earlier – having a Google Local Business (or Google My Business) page can provide an easy SEO win when it comes to location-specific search results. We've put together a handy guide to help you get yours set up and given how easy it is to do and the potential rewards you can gain, there's pretty much no excuse for not having one at this stage.

Listings with reviews tend to stand-out, so if you can garner testimonials and ratings from satisfied clients – you might be able to bolster both your result's prominence and click-through rate. Don't try and game this with fake reviews, however, as these stand out like a sore thumb.

There's also research that suggests Google takes into account feedback from user data when determining these results. So if people navigate to your website from your local search listing, only to find it's not what they're looking for and 'bounce' straight back to their search results – this can detract from your position.

However, if searchers find what they're looking for and remain on your site (a behaviour sometimes referred to as 'the long click') this positive association is similarly taken into account, adding to your relevance for the query in Google's eyes.

Social Contacts: Using Google+ - the search giant trialled something called 'author profiles' and while there's some debate as to whether a similar system is still at work behind the scenes one thing's for sure – your Google+ contacts do influence what you see in search results.

Put simply, if you're signed into a Google account, you're more likely to see results from those you're connected to. Therefore, if you're connected with target audiences and posting about things they're interested in – this can vastly increase the chances of them discovering your content.

We've hopefully established that Google+ has great potential, but it's also got some pretty serious drawbacks. Chief among these is the lack of users.

While there's billions of Google+ profiles, a very, very modest percentage of these are actually active on the platform. 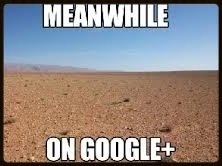 The impressive numbers associated with the platform should be taken with a grain of salt as the rate of sign-ups was hyper-inflated after Google opted in users that had accounts on its other services (e.g. YouTube).

Although some communities are still really active – these are the exception, rather than the rule. So when people talk about building communities and fostering engagement, bear in mind that this is likely to be an uphill battle. 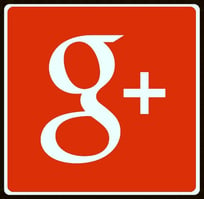 There's been a constant slew of articles predicting the death of the platform pretty much since its inception, but I'd urge you not to believe the hype. In the past, Google has proved its willingness to mercilessly drop products that aren't doing well, but I don't personally think Google+ will be cut anytime soon.

It will undoubtedly change as time goes on, but you shouldn't let uncertainty about its future direction put you off getting your foot in the door right now.

Have you tried your hand at Google+ and if so, how did it go? If you've got experiences to share or questions to ask, be sure to leave a comment or get in touch via Twitter.

And if you're an SME looking to find new business via social media, don't miss out on our introductory guide, which you can download for free today. 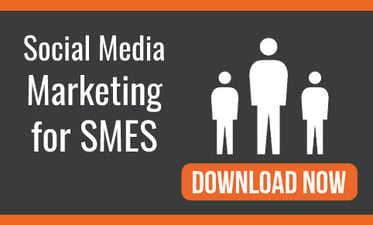